As a Welfare Officer for the Royal Air Forces Association, I have had many requests for medical equipment, respite breaks, financial assistance and general "tea and sympathy" visits from a variety of Veterans, but I faced my ultimate challenge  in January 2010 when I met "David" an ex airman who was suffering with multiple physical problems and whose needs were many fold. David had served in the Falklands, Northern Ireland and the first Gulf war to name but a few. He served for just over 22 years, and in that time had been through some rather nasty experiences. David had retired from the Royal Air Force in 1999. He was divorced, lived alone, and had no contact with any of his family members. He had no friends living nearby.  David had almost totally withdrawn from Society and I was convinced was the author of the book " A thousand excuses to avoid going out". It became apparent to me that as well as physical problems, there may also be some psychological problems,  but, David denied that he was suffering from any form of mental trauma resulting from his RAF service. He said there had been "incidents" but the memory of them had been buried many years before. Being quite concerned about David's well being, and not liking to see what had once been a very active, intelligent and capable man slipping away into a very dark place, I sought help from Combat Stress and was advised to print off some information from the Combat Stress website and ask David to read them when he had a spare moment or two. He agreed to do this and, after a year of building trust, giving lots of emotional support and understanding, David opened up to me and admitted that he was having nightmares and flashbacks from the past and that he needed help. I think that this was a very brave step as Post Traumatic Stress Disorder is not a comfortable bedfellow, it is "the invisible wound" that no-one can see, unlike a broken arm or a cut on the forehead.

David agreed that I could contact Combat Stress on his behalf and start the ball rolling to get him some treatment. He was assessed in his home by a Welfare Officer ( ex military) and then by a psychiatric nurse. Further assessments were carried out by a psychiatrist, followed by a one week residential assessment at the Combat Stress Treatment Centre at Tyrwhitt House in Leatherhead Surrey. After being diagnosed with PTSD during these assessments, David was then offered, a six week residential treatment course at Tyrwhitt House which he attended and followed to the letter with great enthusiasm. He was with other veterans who had similar experiences, but each one had his or her own problems. The symptoms of PTSD are many and varied. There can be nightmares, flashbacks, anger and resentment, depression, feelings of guilt, difficulty in forming or maintaining relationships, violence, alcohol and drug dependency, tendency to self harm, suicidal thoughts, feelings of worthlessness and inadequacy and even turning to crime. This is not a comprehensive list, there are many forms of PTSD. At Combat Stress, veterans are given group therapy sessions, one to one sessions with a psychiatrist and/ or psychologist, relaxation therapy and are generally given 100% support to ease them back in to everyday life by exorcising their demons and learning to cope with whatever life throws at them.

There is no cure for PTSD, but the veteran is taught to be in control and to cope with the dark days and troublesome symptoms. There is a 24 hour helpline available for anyone who needs to talk to someone who understands and cares.

David is now a new man since completing his course at Combat Stress. He has a totally different outlook on life, is motivated , confident and happy. He has thrown himself into charity work with the Royal Air Forces Association and is helping others like himself.  Combat Stress are always there for the Veteran and also, equally importantly, for the family and loved ones of the Veteran. There are many other success stories like David's.

The purpose of my writing this article is to encourage anyone who may be suffering from stress related symptoms, or who knows someone else who is, to speak to their GP, Welfare Worker, or directly to Combat Stress to get help. It is not a sign of weakness,  and nothing to be ashamed of, we are all human.The Armed Forces teach you to be strong and tough. It is so hard to admit to mental difficulties- even to yourself. It can take, on average,  up to 14 years for PTSD to manifest itself after an incident. With all that is going on today, there are many that will suffer, now and in the future. I urge anyone in this situation to get help. I am so pleased that David did. He is my success story and I am so proud of him. He is living again thanks to Combat Stress.

If anyone would like further information and would like to talk to me, or David, to discuss his story, please feel free to ring me on 07760 224992, in confidence.

Further help with PTSD can be found here:

How PTSD Damages Our Soldiers – An infographic aiming to raise awareness about PTSD in the military.

As well as contamination from asbestos blankets and other items of kit, firefighters are at risk of asbestos exposure because of its frequent use in older structures and its ability to linger in the air even after a fire has been extinguished. Since I started publishing this site I have had many emails from organisations dealing with this issue, mainly in the USA I must add.  If anyone has concerns regarding the effects of exposure to asbestos, I strongly suggest they google for further information and details of help available.

A page for information which maybe of interest to members and firefighters.   If anyone has anything they would like to share with the readership, please email your input to webmaster@rafanddfsa.co.uk

A fund-raising effort has been started, the aim to raise 20,000GBP, the purpose, for the erection of a permanent memorial at the National Memorial Arboretum at Alrewas Staffordshire. The dedicated memorial stone is to commemorate all those who have served and are still serving in the RAF Fire & Rescue Service.

Cheques made payable to   The RAF Fire Service Memorial Fund

Let's make this happen, so send your cheque's without delay.

Click here for the latest info:- 2021 Update from Steve Pickson 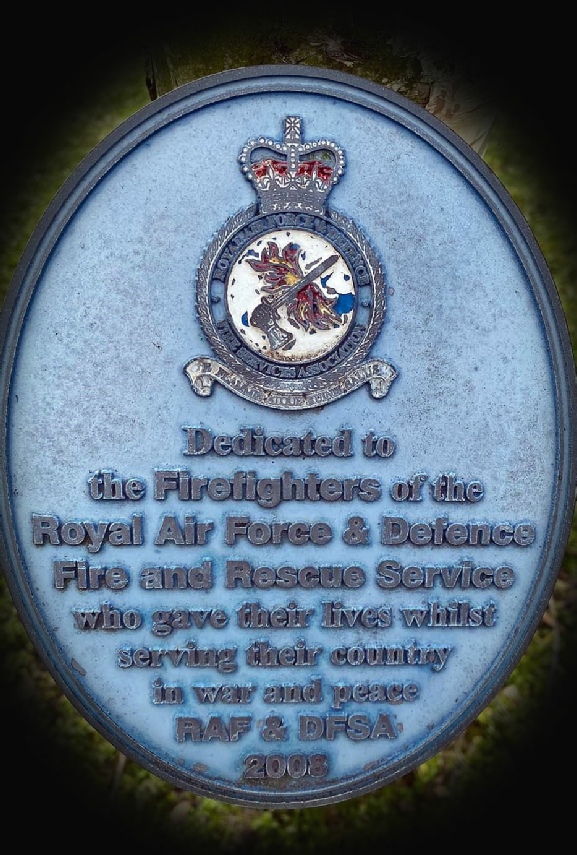 Our very own Flashpoint Editor has commenced production of  120mm Scale models of airfield firefighters from late 1970’s/1980’s era which are now going on sale.  Each figure is hand sculpted, hand cast and hand painted by Reg and then mounted on a solid oak base provided by Don Pape.  The models can be personalised with the buyer’s choice of name displayed on the back of the helmet and there is space on the plinth for a brass plaque to be stuck.  Reg has also made a special edition 200mm scale bust to go with the launch of his new venture.

The cost of the models is:

Please look at the pictures below and if you are interested in acquiring one of these beautifully crafted items you can contact Reg as follows: 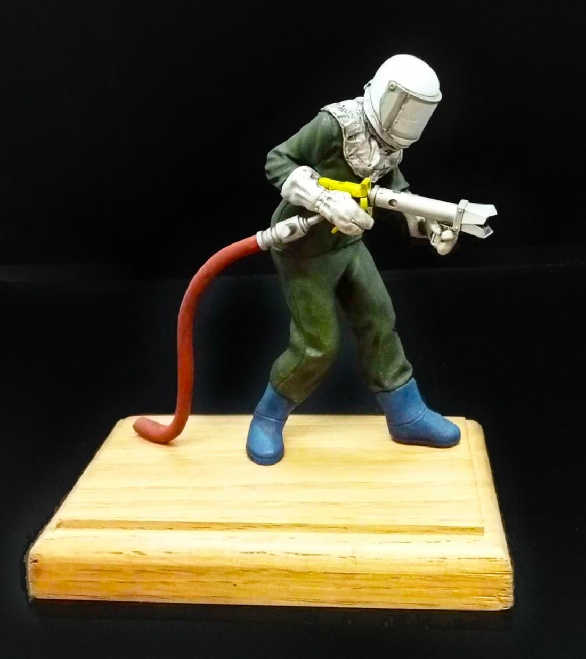 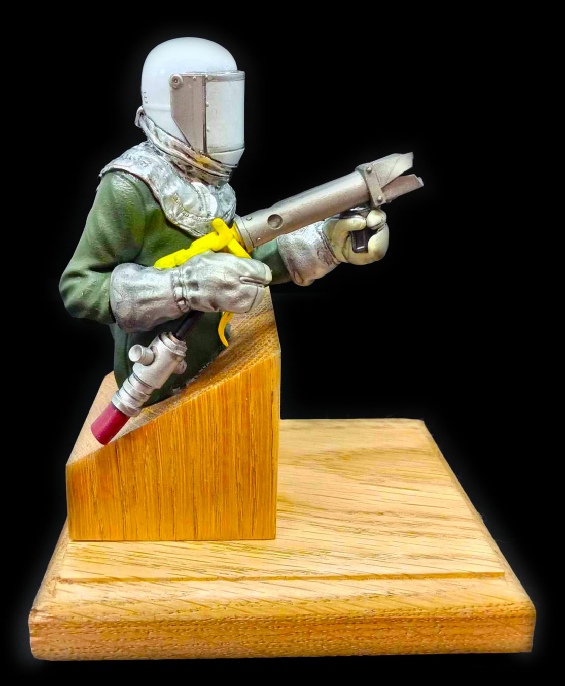